I am so excited to be hosting N.R. Walker on my blog today. She has a brand new book out called Red Dirt Heart. Read the blurb and the excerpt below. Also at the bottom there is a giveaway for a copy of the book! 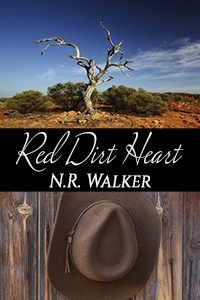 Welcome to Sutton Station: One of the world’s largest working farms in the middle of Australia – where if the animals and heat don’t kill you first, your heart just might.

Charlie Sutton runs Sutton Station the only way he knows how; the way his father did before him. Determined to keep his head down and his heart in check, Charlie swears the red dirt that surrounds him – isolates him – runs through his veins.

American agronomy student Travis Craig arrives at Sutton Station to see how farmers make a living from one of the harshest environments on earth. But it’s not the barren, brutal and totally beautiful landscapes that capture him so completely.

It’s the man with the red dirt heart.

EXCERPT:
Just on sundown, I got off the motorbike, kicked the stand down so the bike stood upright without me and closed the gate. I’d been out all day in the South paddocks doing a final check of fences and water trough pumps before we bought the cattle down from the North. I’d seen the ute back at the homestead as I came in so I knew George was home.

George was my leading hand. He was in his fifties, with greying hair and sun-hardened skin. He’d worked here for as long I could remember, but he was more than a loyal employee. He was my friend, and in a lot of ways, more of a dad to me than my own old man ever was.

He’d been out all day, left before sun-up and headed into Alice Springs. We were a good three hours from the nearest town, and with a list as long as his arm from the Station cook, Ma—who also happened to be his wife—he needed a few hours in town before heading out to the airport to pick up the real reason for his trip: an American agronomy student by the name of Travis Craig.

When my father ran this farm, or station as we called it, every year we’d have people from another country come and spend a couple of weeks as part of some Diversification exchange program. My old man always said it was a good way to source out what other countries were teaching, but really I think he just liked the extra pair of hands at the finish of the dry season. And when we’d had a phone call back in July to ask if we’d be interested in hosting another student, and given it’d been a few years, I thought it seemed like a good idea. Now I couldn’t help but wonder if this Travis Craig would be a help or a liability.

I rode the bike into the yard and pulled up in the shed. I figured they’d know I’d arrived, having heard the bike, so I headed straight for the house. Like most homesteads built almost a hundred years ago, it was a weatherboard home, with an old iron roof and a veranda around four sides to try and keep it cool.

I kicked the red dust from my boots on the veranda steps and tried to brush the same from my jeans, took off my hat before I opened the door and walked inside. There was a suitcase and a duffel bag near the front door and voices at the back of the house.

“In the kitchen,” George called out.

I followed the sound of chatter and the smell of something good to find a meeting of sorts in the old country-style kitchen. The worn, solid wooden table that graced the middle of the room was covered with plates of scones and trays of cups and tea, and three people were in chairs around it—my right-hand man, George, his wife the cook, Ma, and a stranger with short light-brown hair and pale blue eyes.

George was the first to his feet, and the man beside him soon followed. “Here’s the boss, Charles Sutton,” George said, introducing me formally. “Charlie, this is Travis Craig.”

Travis looked about twenty-two years old, not much younger than me. Whereas I was a stockier build, with dull brown hair and boring brown eyes, he was taller than me by a few inches and muscular and lean. He held out his hand and smiled. “Mr Sutton. It’s a pleasure to meet you.” His accent was strange to hear at first, but his smile was warm and wide.

I wiped my hand on my shirt and held it out for him to shake. “Travis,” I said with a nod. “Please, call me Charlie.”

I am many things: a mother, a wife, a sister, a writer.

I have pretty, pretty boys who live in my head, who don’t let me sleep at night unless I give them life with words.

I like it when they do dirty, dirty things… but I like it even more when they fall in love.

I used to think having people in my head talking to me was weird, until one day I happened across other writers who told me it was normal.